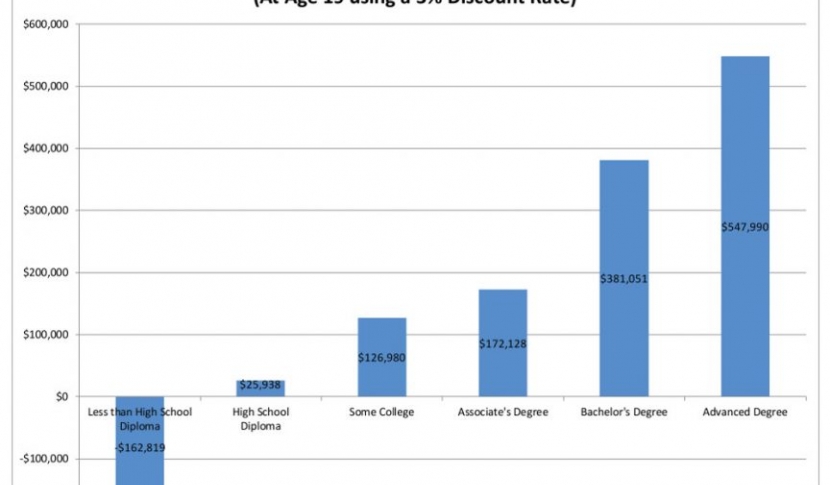 The leaders of Michigan’s 15 public universities, joined by the staff of the Michigan Association of State Universities, have long touted the personal return on investment a student earns with a four-year college degree. We’ve also long talked about the benefits that accrue to the state and to society when it makes public higher education an investment priority. And in recent years, we’ve amplified our outreach to lawmakers, including many fiscal and social conservatives, who may be justifiably cautious about making new investments with public dollars. President Glenn Mroz of Michigan Tech addressed this audience in his column in The Detroit News, and I did much the same with another column in The Detroit News.

For the first time I’m aware of though, we now have a single figure that tallies the lifetime fiscal impact of college attainment, and it was the basis of President Mroz’s commentary because the results are so profound. Prof. Philip Trostel of the University of Maine added up all the costs and benefits associated with an average college-educated individual. It shows that supporting students in attending higher education is one of the most fiscally conservative things a state can do. Here’s how his study quantified net lifetime fiscal impact of college attainment:

SOURCE: “THE TIP OF THE ICEBERG,” CHANGE, THE MAGAZINE OF HIGHER LEARNING, MAY/JUNE 2017

The results speak for themselves: investing in public universities more than pays for itself. Trostel found that from a citizen’s point of view, each potential college degree is worth $481,000 ($556,000 in various fiscal benefits minus the $75,000 cost). In other words, net government spending per college degree is negative!

As of this writing, in May 2018, the Michigan Legislature is considering the fiscal year 2019 budget for higher education. Notably, the Senate’s version of the budget would issue a 3% increase in operations for universities, continuing a period of sustained reinvestment, and mitigating tuition increases. This investment recognizes that the best way to cut costs for social programs is on the front end. Investing in public higher education keeps students on the productive side of the fiscal ledger. We hope that 3% increase in the budget prevails in the days to come, so that thousands more students in Michigan can better afford college and go on to generate these astounding fiscal returns.