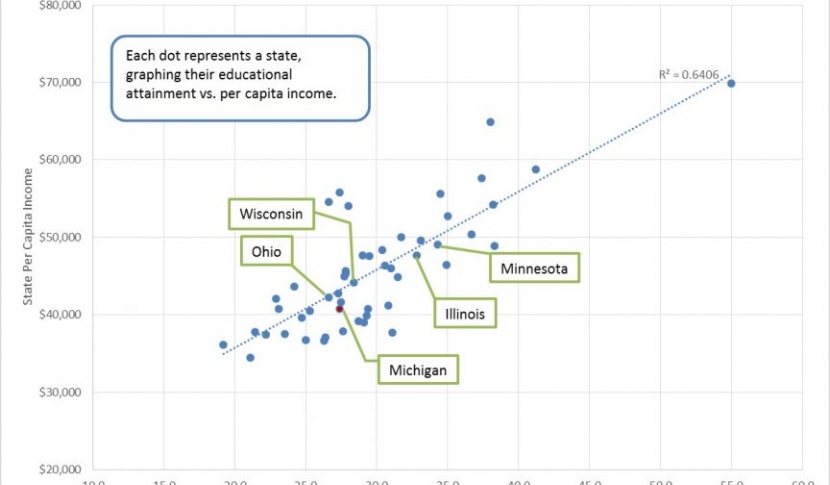 There are few states that would be described as being flush with cash. State officials (justifiably) want to know the return on the investment they’re making with public revenues. And for years, state universities have argued in turn that investment in public higher education leads to wealthier states. With a little help from our friend Excel (and an assist from SHEEO and the U.S. Census Bureau), we can validate that claim.

Shown below is a chart of all fifty states arranged by how much each state spent per student on public postsecondary education (both public universities & community colleges) versus how much each state earned in per capita income. You can see that there exists a positive correlation between these two variables—more state funding of higher education is associated with higher state incomes.1 It isn’t the tightest-fitting regression, but for a social science sample of 50 states, it’s strong enough to see the general trend.

What’s interesting to me is the challenge of explaining some of the outliers on this chart. For example, the four points farthest above the regression line are New Hampshire, New Jersey, Massachusetts, and Connecticut, in order from left to right. Four New England states that all serve as bedroom community suburbs for New York City or Boston. They also happen to each have a private Ivy League research university, plus a number of elite private liberal arts colleges. In fact, if you deduct out the seven states that have an Ivy League institution, the relationship between how much a state invests in higher education and how much its residents earn becomes stronger-fitting:

Those states with Ivies are essentially getting a private education bonus. World renowned private institutions draw in predominantly upper income students from around the country and world, and the state doesn’t have to pay to support this education. In Michigan, we don’t have any private research Ivies. We do have some great private institutions like Kalamazoo College and Alma College, but these small liberal arts colleges don’t have the enrollment capacity to educate the state. Meeting the Governor’s goal of having 60% of Michigan residents hold a degree or other high quality credential requires a lot of enrollment capacity. Capacity which is only found in public universities in Michigan (who have 295,000 enrolled students).

I also pulled the data on the percentages of a state’s population that holds a bachelor’s degree. Surprising nobody, a state’s level of educational attainment is very strongly correlated with state per capita income:

This trend is even stronger than the first example and obvious to anybody – more educated states are wealthier states. Again, though, let’s look at a strange cluster of outliers. The little trio next to the Wisconsin tag are Wyoming, North Dakota, and Alaska – three of the four least populated states, and all heavily reliant on oil and gas production. This data covers 2014, a booming period for U.S. energy production where high school graduates willing to risk their neck could make a lot of money in the oilfields. Meanwhile, gas was $1.99 per gallon in Lansing, MI in when I filled up a few days ago, and $2.25 a gallon nationally, so I’d be very curious to see how well those three states are faring. So let’s see the chart without them:

Behold an incredibly tight correlation (that remaining outlier way above the regression line is Connecticut, again home to high salaried suburbs of NYC, though still well educated). It may not be scientific to exclude certain elements of a given data set, but it’s useful to illustrate a public policy point. If policymakers want to make sure that their state is thriving, growing, and wealthy, they should look to higher education and they should fund it sufficiently. And since the private sector of higher education can’t and shouldn’t be forced to take on all students, policymakers should look to public higher education as the main engine of economic growth in states. That is, if the moral necessity of educating our next generation isn’t enough by itself.